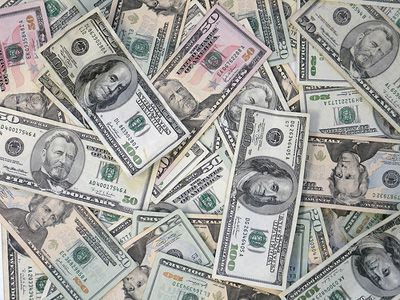 The Rarest of Bills

A completely cashless society sounds clean and convenient, and although we’ve made huge strides, we’re not quite there yet. Despite the magic of PayPal, Square, credit cards, and mobile wallets, some of us need to carry around a handful of greenbacks. While we can choose from a rich array of singles, fins, sawbucks, Jacksons, $50s, and Benjamins, there are several other denominations that the U.S. Treasury has discontinued—or that are just plain rare. Here are the most notable ones.

The $2 bill originally featured a portrait of Alexander Hamilton, but was later redesigned to portray Thomas Jefferson. Aesthetically, the $2 bill is something to behold. The reverse side features a reproduction of one of the most famous paintings in American history: “Declaration of Independence” by John Trumbull.

Excluding the decade from 1966 to 1976, $2 bills have been printed uninterruptedly since the Civil War. Yet, the average American who doesn’t handle cash for a living can go years without seeing one. While the $2 note is still in circulation and the Bureau of Engraving and Printing recognizes it as legal tender—it is considered to be the rarest currency denomination in the U.S.

The Treasury minted several versions of the $500 bill, featuring a portrait of President William McKinley on the front. The last $500 bill rolled off the presses in 1945, and it was formally discontinued 24 years later in 1969.

Like all the bills featured here, the $500 bill remains legal tender. Most $500 notes in circulation today are in the hands of dealers and collectors. That being said, should you come into possession of a $500 bill, you’d find that its market value far exceeds its face value, with even worn specimens commanding upward of a 40% premium on the open market.

The original $1,000 bill featured Alexander Hamilton on the front. When someone presumably realized that it might be confusing to have the same former Secretary of the Treasury on multiple denominations, Hamilton’s visage was replaced with that of another president: the 22nd and the 24th, Grover Cleveland. Like its smaller cousin the $500 bill, the $1,000 bill was discontinued in 1969. And like the $500 bill, the $1,000 bill would seem to have a lot more use now than it did then.

Why? Inflation, of course! The Consumer Price Index was at an estimated 36.8 back in ’69, while it’s at about 240 now, meaning that a $1,000 bill today would be the equivalent of a relatively modest $153 bill during the Summer of Love. Does it make any sense that we’ve lost larger denominations as the value of a dollar has gotten progressively smaller? The Treasury argues that keeping the denominations inconveniently small minimizes the possibility of money laundering.

That being said, hold onto a $1,000 bill that finds its way into your palm even more tightly than you would a $500 bill. There are only 165,372 of these bills bearing Cleveland’s visage still in existence.

The $5,000 bill was initially issued to finance the Revolutionary War and was only officially printed by the government when the Civil War began. The bill was graced with a portrait of James Madison. President Richard Nixon ordered that the bills be recalled in 1969 due to fear of criminals using them for money-laundering activities.

Salmon P. Chase might be the most accomplished politician in our nation’s history never to have served as president. But even though he was a governor of, and senator from, Ohio, served as Secretary of the Treasury under Abraham Lincoln, and became chief justice of the Supreme Court, Chase is remembered by most people as “the guy on the $10,000 bill.”

The largest denomination ever printed for public consumption, the $10,000 bill never got much use. This lack of use is understandable, given that its value outstripped the net worth of the average American during most of the time the bill was available. The bill was first printed in 1934 and was part of the 1969 purge of large currencies. Like its $5,000 counterpart, only a few hundred authenticated samples survive.

Featuring a portrait of Woodrow Wilson, the $100,000 note was actually a gold certificate that was never circulated or issued for public use. The Bureau of Engraving and Printing created them during The Great Depression in 1934, for conducting official transactions between Federal Reserve banks. Only 42,000 of the $100,000 bills were ever printed.

While the $100,000 bill can not be legally held by collectors, some institutions like the Museum of American Finance display them for educational purposes. The Smithsonian Museum and some branches of the Federal Reserve system also have these rare bills in their possession.