Bitcoin Private, a supposed “fork-merge” of Bitcoin and Zclassic, is intended to 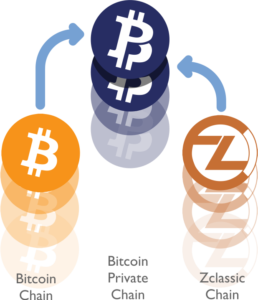 llenges, choices, and failures of prior forks. To accomplish this, Bitcoin Private will use a larger block size (2 MB), a shorter block time (2.5 min), and an ASIC-resistant (GPU-friendly) proof-of-work (PoW) algorithm for mining — Equihash.

Furthermore, due to the dual nature of this fork-merge, more of the crypto-community will find themselves involved. After the snapshot, ZCL (t & z) and BTC (segwit & normal) addresses will receive BTCP (1:1 for both) at the same address. This is a first-of-its-kind fork and the open source blockchain community is finally beginning to fully explore the malleability of UTXO sets. 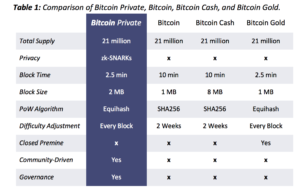 The snapshot of Bitcoin and Zclassic is set for the first blocks timestamped after 5 PM UTC on February 28, 2018, with the fork/main-net launch occurring approximately 2 days later. After launch, there will be approximately 700,000 mineable Bitcoin Private. Remaining true to Satoshi’s vision of a low inflation coin, a starting block reward of 0.78125 Bitcoin Private has been selected. The first halving will occur after ~66,000 blocks in order to line up with the Satoshi halving scheme (around April 27, 2018). Following this, a halving will occur every 840,000 blocks. This will allow for extremely low inflation, testing Satoshi’s original plan for 5 Bitcoin when approaching the 21-million-coin supply limit. However, if this experiment proves unsuccessful, an alternative plan can be implemented, which is outlined in Section 7.