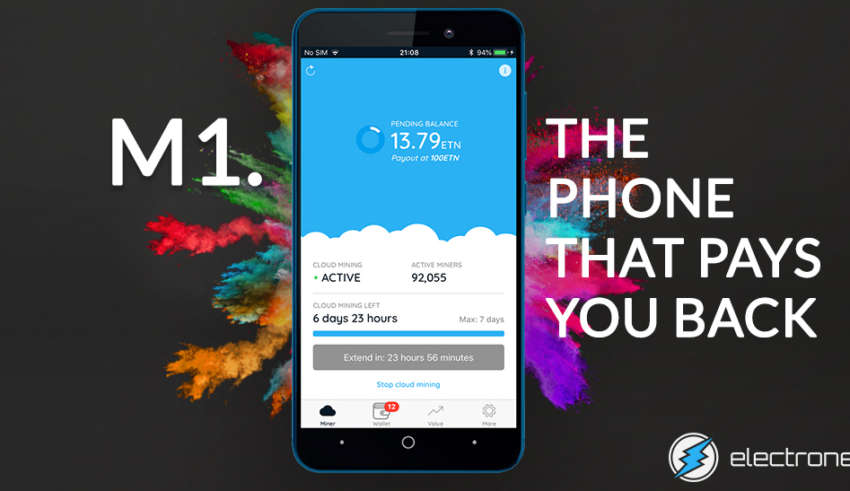 ETN can now be used to top up with airtime and data in South Africa direct with the Electroneum App. Another huge first for ETN.

You need to see it to believe it – it is literally jaw droppingly good looking!

Electroneum has partnered with a large phone manufacturer to create an Electroneum Smartphone – “The phone that pays you back”. Electroneum M1 Smartphone has a fantastic spec including dual sim (so people can have a SIM capable of ETN top up as well as any other SIM they currently favour). It’s a 4G model with 8GB of internal storage (expandable). Dual camera’s, thin, light and beautiful in Electroneum Blue. We’ve got pallets of thousands heading out to a couple of international destinations as we speak, said Richard Ells, Founder & CEO, Electroneum.com

Why launch an Electroneum phone?

Our extensive research on the ground over the last year showed us that both users AND MVNOs both get a sense of added credibility and trust from hardware manufacturers. It’s not EASY to build a phone! It shows our commitment to the mobile industry and allows us to speak to MVNOs in a language they fully understand, whilst introducing cryptocurrency. From a user’s perspective it allows a user to trust a new brand (Electroneum) that they might not have heard of. There is (unfortunately) still a lot of mistrust in the cryptocurrency space and we are doing everything we can to ensure Electroneum stands head and shoulders above ALL other cryptocurrencies as the one to trust for partnerships and long term business development. This is a fantastic tool for creating trust and credibility whilst also bringing a new viral growth mechanism into the on-the-ground ecosystem. Imagine the talking point of a brand new phone – and when I say it’s good looking – I really mean it. It looks as good as a $1000 USD phone – but it’s likely to be selling for around $80 USD (subject to individual distributors markups).

The phone really is Electroneum all the way to the core, it comes with Electroneum wallpapers, an animated Electroneum start up screen and comes pre-loaded with the Electroneum App!

How much is the phone costing the Electroneum Project?

I’m very careful with what we spend to ensure we get the best possible value for the long term success of the project. We’ve spent some money to build and ship these M1 Smartphones, but we are actually selling them with a small profit. They will be a huge viral growth help – with ZERO long term cost to the project. In fact, they’ll even start bringing in revenue!

These will first be rolling out in the ecosystem areas that we get live – but we will also be getting them fulfilled by Amazon Marketplace in the not too distant future.

We’ve talked about mass adoption of cryptocurrency and how we are going to achieve it by partnering with mobile operators. We’ve worked hand-in-glove with multiple operators to fully understand both the requirements of their businesses and every facet of how to integrate with them. We’ve worked tirelessly for over a year to ensure everything we need to achieve this is in place. We overcame every challenge, launching instant payment, KYC, crypto accounting and cloud mining. Each of these was necessary to achieve our first major goal – allowing mobile airtime and data to be purchased directly via ETN.

I’m very pleased to announce that as of today, users in South Africa can top up their airtime and data via the Electroneum app (click MORE then see TOP UPS).

They’ll need a free SIM from The Unlimited. The Unlimited are an MVNO in South Africa powered by CellC. Users can complete a form (South African users can get a free SIM within 2 hours from over 800 Click Store branches! Full details from the Electroneum App – click MORE then see TOP UPS)

This is a world first for a cryptocurrency and it unlocks the first stage of the ecosystem development we have been talking about since launch.

It’s critical to understand that this has never been done – so learning on the ground and understanding everything that is taking place is critical. Starting small in a single city and then spreading our marketing and knowledge to a second and third city over 3 months. The knowledge we gain from this first real-world trial will be what powers us in to relationships elsewhere in the world, with solid facts, figures and know-how.

Cloud mining has been made live on Android and iOS because we realised that our first iteration of mobile mining favoured people who had perfect internet coverage. Our target userbase is the unbanked – and they are often not connected to the internet 24/7. Cloud mining allows full reward with periodic internet access, which then means you have a great REASON to install the free Electroneum app. Mobile mining rewards are a fraction of total blockchain rewards, but they go direct to the user. That user can now top up their airtime and data directly from the Electroneum app if they use the free SIM from the Unlimited.

South Africa is the PERFECT place for us to trial this ecosystem in the real world. There are millions of people in South Africa who earn less than $30USD per month and over 20 million earning less than $75USD per month. The first step in our GLOBAL ecosystem development is to get a working ecosystem trial in place. First give ETN a value in society OUTSIDE of crypto exchanges (remember a lot of these people are unbanked and can’t access crypto exchanges). This is now in place – with users being able to purchase airtime and data directly.

So what? You might ask? What does this mean? This is the START of something absolutely incredible! The first step was to get ETN to have a value outside of a crypto exchange (something that really doesn’t exist with many cryptocurrencies – and none at any kind of scale). With this partnership we have achieved that. The next step is to make people on the ground not just want to cloud mine to gain ETN but to EARN some ETN so they can pay for more airtime and data than mobile mining allows. We need to show strong viral growth in South Africa (we are positive we can achieve that) and then we need to show great take-up of SIMs from The Unlimited (we are also confident we can achieve this!). Once we prove that partnering with Electroneum can grow an MVNO we will unlock many global deals that are currently watching and waiting!

Remember – airtime and data are just the START. It’s the first building block to the ecosystem. Everything else stems from it as it gives the first reason to want to EARN ETN.

With the launch of our Gig Economy website (entirely powered by ETN) coming in the next six weeks or so we will enable people to learn and sell a digital skill – getting paid in ETN. Knowing that the ETN they get paid from around the world has a REAL WORLD value to them in airtime and data. Remember that they can top up OTHER mobile phone user’s phones – not just their own – as long as that user is using a free SIM from The Unlimited. They could also potentially sell their ETN to an agent who can then top up people’s phones and make a small profit (subject to local regulations).

Having an ultimate value backstop of airtime and data means we unlock entrepreneurial spirit and allow people to collect other people’s mined and earned ETN and make use of it in innovative ways, perhaps creating a remittance service or an ETN to cash service and vice versa (subject to local regulations of course).

We now have a new team on the ground in South Africa who will be working closely with The Unlimited in Durban, then Cape Town and then Johannesburg to bring the Electroneum brand to the townships and general population over the next three months. It’s going to be an amazing thing to watch and we’ll keep you posted via our social channels of what’s happening on-the-ground.

Our aim is to bring growth to The Unlimited via the viral growth of Electroneum. Once we prove this symbiosis in a real world environment, we have other global MVNOs (and even a couple of MNOs) watching closely to see what success we can bring. We have a strong South African community already and you’re going to see that SUPERCHARGED!

We’ve been working hard for a year – of course there is! We’ll be keeping it under our hats until it’s all ready though! Watch this space – but know that we are totally committed to making Electroneum THE cryptocurrency of the masses – just as we promised.

Electroneum has the best community in the entire cryptocurrency space and I’d like to thank you all personally for all your support and community spirit!