Enjin Coin (ENJ) is a new ERC20 token that runs on the Ethereum network.  This coin is aiming to become a staple in the gaming industry by providing multiple functions. There will be a total hard cap of 1,000,000,000 Enjin tokens to ever reach circulation.

There are already a couple of “gaming tokens” on the marketplace and that may leave you wondering what makes Enjin special.  One thing that sets Enjin apart is the fact that they are actually allowing developers and content creators to create virtual items on the blockchain which gives users actual ownership on the blockchain.

While that is one facet of Enjin’s vision,  another is the gaming virtual currency market in general.  Both Gametokens and MobileGo have working tokens,  but they do not support any major wallet and have a very low market of usability at this point. Enjin’s unique model is set to captivate much more of the huge market of computer/console games through both general online currency usage and by developers creating actual ownership of digital items that could possibly gain in value(think OPSKINS and similar online skin website games).

Enjin has a similar goal as it’s competitors by providing chargeback-free virtual currency for online gaming transactions,  which happen to have extremely high chargeback fraud rates at 1 out of every 7 transactions becoming fraudulent. 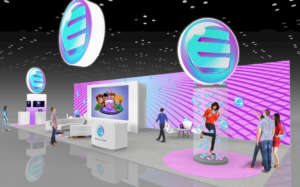 All 3 platforms will provide this service but Enjin provides it with extra features including the increased usability with the ability to create items with Enjin to bolster the value,  a mobile smart wallet in Q4 2017 which will immediately make it more usable and investable by making it easily accessible and tradeable,  possible deals with MAJOR gaming engines such as Unreal,  immediate exposure to the Minecraft Community which has been rumored to have a sequel in the making,  and a thriving prior community and user base. Enjin seems like to be the best of the bunch and it is the only gaming token.