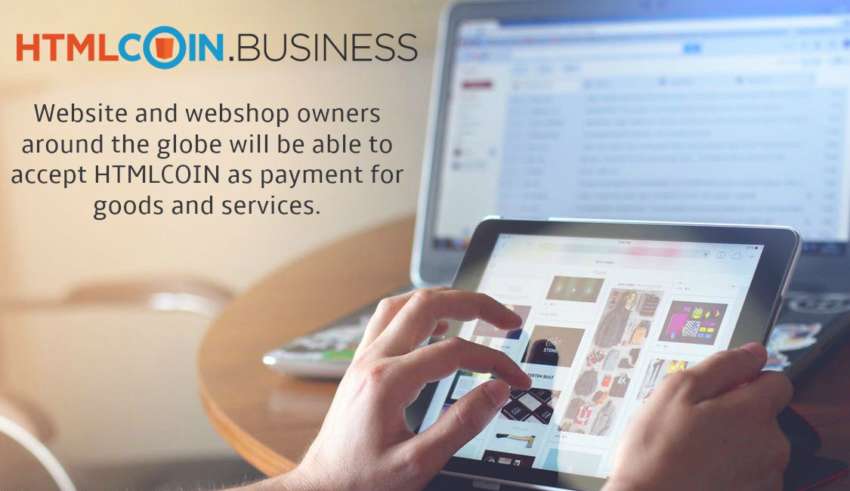 After Announcing P.O.M.A and a Partnership with Titanium Blockchain, HTMLCOIN Plans to Add Turnkey Payment Processing for All Stores to Use HTML Currency and Gets Listed on More Popular Exchanges. Further info can be found at www.htmlcoin.com

HTMLCOIN.Business, a leading hybrid blockchain, has announced the development of a turnkey solution for using HTMLCoin cryptocurrency (HTML) as a payment processing gateway for handling financial transactions for, not just their P.O.M.A (Proof of Mass Adoption) Project, but for all websites and stores online. It appears this turnkey payment solution follows the natural progression from reports of HTMLCOIN being used by businesses in the United States, Europe, and South America for payment of goods, services, and employees.

A recent Reddit article entitled “HTMLCOIN is My Future Payment Method to Pay Salaries to My Employees” recounts a German business owner using HTMLCOIN to pay employed software and design specialists located throughout Europe.
The author writes, “Payment was always a big issue to me and it caused me always a lot of headaches to transfer money to my employees and freelancers. We tried Paypal, MoneyGram and Western Union and in some countries, it works and in some countries, it does not work… I promise you, this coin will solve all problems with just one transaction from the desk…The internet industry, freelancers, online shops and customers of these from all over the world(sic) will love this coin.”
Quoting lead developer, Arjen Breedt, “The core developers are completing the basics for the payment gateway that handles all the financial transactions for payments and rewards in HTMLCOIN. The API is already working and the teams are testing it as we speak. The big surprise is that this gateway is designed in such a way that this module should not only be used on the P.O.M.A. platform itself, but it enables website and webshop owners around the globe to accept HTMLCOIN as payment!”

The addition of $HTML on FatBTC.com exchange is accompanied by a 30,000,000 HTMLCoin giveaway to celebrate the listing. FatBTC will include the currency pairings of HTML/BTC (Bitcoin), HTML/ETH (Ethereum) and HTML/FAT. Official trading for these pairs begins at 12:00 AM on Feb 9th, 2018（UTC+8）. The first giveaway starts on February 5th and consists of 3 separate giveaway events which last up to a month.
HTMLCOIN Event #1 consists of a 10,000,000 (million) HTMLCOIN giveaway for Invitation Rewards and begins on February 5th. Event #2, which begins on February 9th, rewards 14,000,000 million HTMLCOIN in a trading competition based on volume. Giveaway Event #3 also starts on February 9th and rewards HTML/FAT trades with an airdrop of 6,000,000 total coins.

Through a community voting poll hosted by Kucoin, the HTMLCOIN community also received enough votes to be listed on the Kucoin digital assets exchange.
Kucoin.com, an international blockchain assets exchange, is one of the fastest growing cryptocurrency exchanges and usually hosts a trading giveaway contest based on volume or a Twitter airdrop contest for newly listed trading pairs. Kucoin is preparing to officially add HTMLCOIN sometime in the coming week according to their official social media.
FXCBit, C-Patex, Open Ledger, Cryptobridge
HTMLCOIN has shown a strong affinity with South American crypto traders as the blockchain currency was added to FXCBIT and C-Patex. FXCBIT.com is a digital currency exchange based in Brazil. C-Patex, is an Argentine-based exchange, that has also planned to list HTMLCOIN in the coming weeks.

HTMLCOIN was also listed by two leading decentralized trading platforms, Cryptobridge and Open Ledger. Open Ledger and Cryptobridge are both decentralized cryptocurrency exchanges (DEX) that support trading the most popular cryptocurrency pairs.
HTMLCOIN is both a cryptocurrency and a blockchain based on a fully integrated Bitcoin Core and Ethereum CPP client codebase, to deliver smart contracts, decentralized applications (DAPPS) and allow ICO (Initial Coin Offering) of other cryptocurrencies. It implements an extendable design which is capable of adding more virtual machines (VM), enabled through an Account Abstraction Layer, which allows an account based Virtual machines to function on a Bitcoin UTXO-based Blockchain. It has the strength of Bitcoin and flexibility and features of Ethereum all on one platform.

To get start with crypto go to