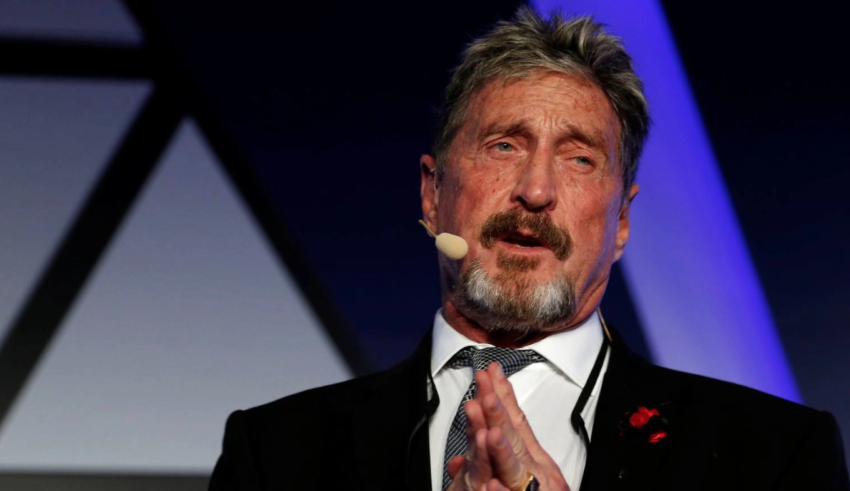 On the heels of launching his crypto platform, McAfee Magic, the former antivirus software tycoon John McAfee plans to launch a distributed exchange on Monday, October 7. ‘McAfeedex’ will run on the Ethereum blockchain and McAfee insists the exchange will have no restrictions.

In June John McAfee launched a digital currency access point that combines manual and bot trading across eight exchanges on one interface. McAfee Magic connects people to over 500 digital currencies and has gathered 11,743 users so far. On Friday, McAfee told the public that he’s now launching an exchange called McAfeedex which “requires no name, no documents, no email, no bank info” to use. “Transaction details are private and nothing is monitored — Nothing recorded and no restrictions,” McAfee explained. The former anti-virus software tycoon further added:

“The McAfee Distributed Dex beta version is coming 10/7. Play with it. It takes time for enough users to join to make it real, but if you play, and be patient, you will see it’s the door that frees us from the government’s cornerstone of control: Fiat currencies. It can’t be shut down.“

The McAfeedex website shows a small preview of what’s to come, like free swaps for ETH-based tokens and a 0.25% taker fee. The site says it will have no blocked jurisdictions so certain countries will not be banned from participating. Prior to the DEX launch, McAfee hinted he had a surprise as he shared four unique pictures. “Clues to my Monday announcement: It will bypass, once and for all, the nightmare of first image, totally redefine the second, bring on the hope of the third, and, hopefully, give us all the spirit of the fourth,” McAfee stated. The news also follows McAfee’s boat run escapade as he’s allegedly been running from U.S. law enforcement for the last nine months. In January, McAfee told the press that he was on the run from “unspecified charges of a felonious nature.” Moreover, he said prosecutors also charged his wife and four members of his 2020 presidential campaign. “I have not paid taxes for eight years and I have made no secret of it,” McAfee emphasized when he first left the U.S.

McAfee Insists: ‘We Have the Tools to Win’

Since then, McAfee has been hiding out on his “Freedom Boat” and traveling to locations on land in full secrecy using a tin-foiled lined, Faraday cage-like bunker. On Saturday, October 5, McAfee tweeted that three-letter government agencies were not after him specifically for his arsenal of guns or his failure to pay taxes. “The reason governments are after me has nothing to do with taxes, guns, drugs or anything as mundane — It’s because I speak the truth about how we can throw off the yoke of a burdensome government,” McAfee remarked. His tweet further stressed:

“We have the tools: Distributed exchanges and privacy coins.“

No matter where people stand on what McAfee says or does, they can’t deny that he captures an audience. As crazy as he seems, McAfee always sticks to his guns when it comes to telling the world his principles. He often speaks of tenets like how taxation is theft and every individual has a right to financial privacy. He’s simply stating again what he said months ago when he fled the states that “cryptocurrencies can free the individual.” “Every so often and very rarely, a clash of old and new cultures brought about by technology changes civilization,” McAfee said at the time. “Cryptocurrency is one of these technologies and probably the most dramatic to have occurred in human history since the invention of fire — Governments will not be able to collect taxes when everyone is using privacy coins.”

What do you think about John McAfee’s upcoming DEX beta launch? Do you agree with what McAfee says? Let us know what you think about this subject in the comments section below.

Disclaimer: This editorial is intended for informational purposes only. Readers should do their own due diligence before taking any actions related to the mentioned company, trading platform or any of its affiliates or services. Bitcoin.com or the author is not responsible, directly or indirectly, for any damage or loss caused or alleged to be caused by or in connection with the use of or reliance on any content, goods or services mentioned in this article.