November 23, 2022
Contact Us: info@atozcrypto.org
12 New Articles
Home Latest News The journey of currency: A tale worth retelling and exploring 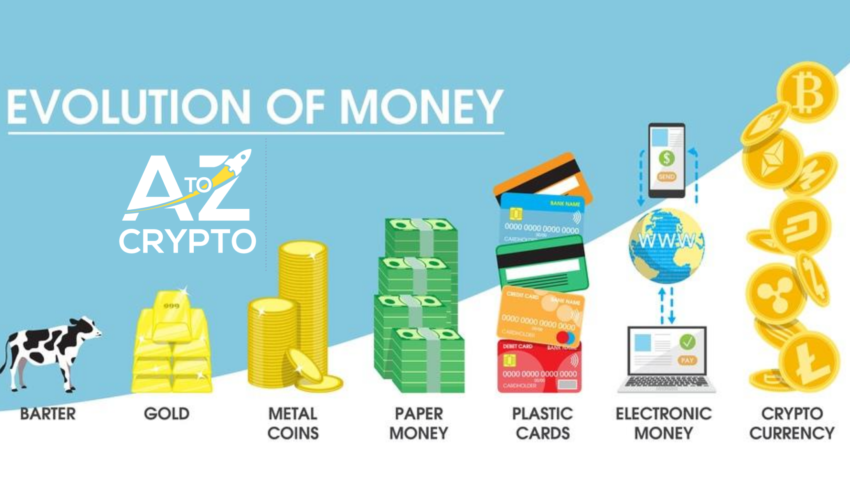 Humans and their currencies have seen and been through a lot. From gold and silver coins to Bitcoins, we have used them all. What next? We will find out soon.

The journey of currency is an interesting one, from the barter system and coins to cash to digital wallets. However we are not talking about the ancient period, rather, we are talking about its modern history. Paper money was first introduced in China, and Europeans caught on to this trend during the 17th century. During that time, coins golden and silver, are common currencies. Until the 20th century, these coins were in use. The era of coins came to an end with the Nixon administration.

Paper dollars were printed and used as a common means of currency all over the world. People welcome this change, as paper currencies are easy-to-use, light, and can be easily carried. Cheques are another form of paper currency, prevalent in the world. Although paper bills offered several advantages, there are several disadvantages too.

People have to wait in long queues to withdraw or deposit cash and checks in front of the banks. This can take a considerable amount of time as the processing speed of cash and cheques can vary, depending on various factors. Also carrying cash or cheque can pose a bit of risk. You may lose or misplace it, or anyone can still it from you, due to a moment’s carelessness. News about calculation mistakes and not unheard of either. Plus, there’s only limited paper money.

Don’t get me wrong, paper bills are still used as a currency, but the scope is slowly diminishing. Upgrade to this is a card, i.e., debit cards, credit cards, etc. Cards are faster, efficient, and easier to carry. You don’t have to carry cash with you anymore, thus you are secure. Or are you? Online scams regarding credit and debit cards are quite common. So, there are some security risks involved with them. Also, there is a transaction limit, and you have to pay a hefty processing fee after a certain amount.

So, cards are not a sure-shot alternative either. Sure, these can be used simultaneously with cash and digital wallets, but they cannot be used as standalone currency.

Now, let’s discover, Bitcoin. It is introduced in 2009 by a person, or a group, under the pseudonym, Satoshi Nakamoto. This is a new-age currency, which is decentralized, peer-peer, and secure. Also, it has all the characteristics of real money. At first, people were a little skeptical of Bitcoin. But, since then, it has come a long way.

Now governments are accepting it and introducing new laws to govern the market. Corporate entities are also using it as a mode of payment. Like any other real money, it is scarce, only 21 million Bitcoins exist. This scarcity is caused due to the protocols existing in the market. There are other problems associated with it too.

However, Bitcoin isn’t the only contender. Sure, it is the first of its kind and quite popular, Ethereum, Litecoin, and Altcoin is also coming to the surface. Money has come a long way, it still has a long way to go.  It’s wise to accept these changes and go with the flow.