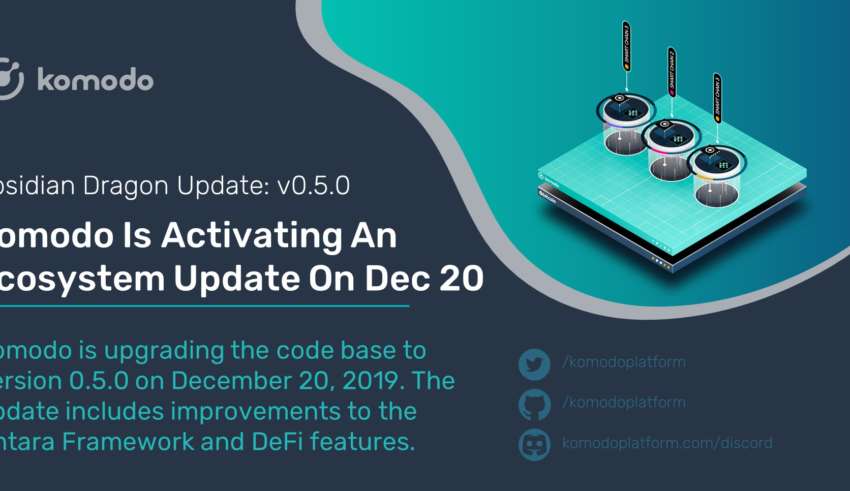 On December 20, 2019, at block height 1670000, Komodo will activate a platform-wide update that provides improvements to the Antara Framework, including upgrades to Komodo’s Proof of Stake (PoS) implementation and new modules that make DeFi capabilities available within the Komodo ecosystem.

At the end of 2018, on December 15, Komodo activated a huge ecosystem update, adding Sapling support and new Smart Chain parameters to more than 40 chains at once.

Now, almost one year later to the day, Komodo is pleased to announce that another platform update will be activated on December 20, 2019 at block height 1,670,000. This version 0.5.0 update, dubbed Obsidian Dragon, will keep all projects within the Komodo ecosystem at the cutting edge of the blockchain industry.

The Antara Framework is Komodo’s toolkit for easy, end-to-end custom blockchain development. The Antara Framework gives every business a customizable Smart Chain that comes equipped with a library of modules, such as trustless oracles and a quantum-secured blockchain module, plus an open API that can connect external software and applications to the Smart Chain itself.

With the coming update, Komodo will add several improvements to existing Smart Chain parameters. In particular, the update will add a new module that enables DeFi features within the Komodo ecosystem and improve the Proof of Stake (PoS) algorithm that Komodo offers.

Decentralized Finance, or DeFi for short, is rapidly becoming a primary use case for blockchain technology. Whereas traditional finance, particularly borrowing and lending money, is wrought with inefficiencies, red tape, and middleman that charge high fees, decentralized finance is frictionless, peer-to-peer, inexpensive, and nearly instantaneous.

Earlier this year, Komodo announced a solution to the oracle problem with the DTO (decentralized trustless oracle). This Antara Module allows off-chain price feed data to be brought on-chain in away that must be validated by every node in a chain’s network. This makes it extremely secure and prevents bad actors from manipulating the price data for their own gain.

Komodo also offers a stablecoin solution within the Antara Framework. This module allows any Smart Chain project to launch a stablecoin pegged to any asset for which a price feed API exists. Using the DTO Module, the price data can be brought on-chain and used to regulate the price of the stablecoin. Thus, the stablecoin can be pegged to the price of a fiat currency, such as the USD or EUR, another cryptocurrency, like BTC or ETH, or any other financial product or commodity, such as a stock, bond, or the price of an ounce of gold.

Now, with the coming update on December 20, Komodo is preparing to offer crypto-backed stablecoins with decentralized lending capabilities. Users will have the option to lock a sum of cryptocurrency into a secure multi-signature wallet and withdraw up to 80 percent of the value of the locked assets in the form of a stablecoin.

Alternatively, the user can choose to do nothing, at which point other users within the ecosystem can buy the debt for an immediate, albeit relatively small, profit. This way, all users have an incentive to pursue profit and the entire system is guaranteed to stay solvent.

More information about Komodo’s crypto-backed stablecoin and DeFi features will be released in the coming weeks.

With the previous PoS implementation, users needed to run a script in order to efficiently stake their coins. This was not always a user-friendly process and had to be completed manually from the command line.

KMDLabs, a blockchain incubator and incentivized testing environment, is holding a bug-hunting contest on the new PoS algorithm this Sunday, December 8 at 12:00 UTC. Learn more about the KMDLabs bug-hunting competition here.

The coming update also includes optimizations for a number of Antara Modules. While these changes are minor, they offer a wide range of improvements to make building within the Komodo ecosystem a simple and efficient as possible.

Although the zk-SNARK protocol is no longer active on the main KMD chain, this privacy protocol is still available to all projects building with Komodo’s technology. There are a number of privacy-focused projects within the ecosystem, including HUSH Coin and Pirate Chain. Of course, privacy features are optionally available to all future projects building with the Antara Framework, too.

As such, it’s crucial to ensure that the zk-SNARK protocol is functioning flawlessly. The coming update fixes a minor issue involving the shielded z-transaction mempool. Previously, in some cases, a node would crash if a UTXO from an unconfirmed z-address to t-address transaction was spent. This issue was patched with a hot fix on November 3 but will be fully and permanently resolved with the version 0.5.0 update.

As stated above, the Komodo v0.5.0 update will be activated at block 1670000, which will be mined on December 20, 2019. This is a mandatory platform upgrade, so all miners, exchanges, and individuals running full-seed nodes must update to the latest software prior to block 1670000. Those who do not update prior to December 20 will not run on the correct network.

For more details about this update, please see the Komodo v0.5.0 changelog here.